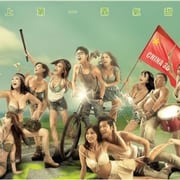 A sinologist by training, studying Chinese literature with a focus on the early modern period (Ming and Qing), Professor Zamperini will engage in a transcultural conversation about studying and teaching sex and pornography in a global context. Drawing from her experience as a scholar and a teacher posed at the intersections of early modern Chinese literary studies, gender and sexuality studies, and feminist theory, she will discuss the fraught relationships between disciplines in the context of Euro-American academia, in order to open up a conversation about ways to move beyond disciplinary divides and hierarchical and one-directional trajectories between academic fields.

Paola Zamperini has a Ph.D. in Chinese Literature and Women and Gender Studies from the University of California at Berkeley. Her first book, Lost Bodies: Prostitution and Masculinity in Chinese Fiction published with Brill in 2010 is a comprehensive study of representations of courtesans and prostitutes in late-Qing fiction. Paola Zamperini reads the courtesan figure as a multilayered literary icon that is perpetually constructed to perform shifting ideas, dreams, and anxieties of the men who write and read them into being. Through the dynamic figure of the sex worker (both prostitutes and courtesans), she delineates a genealogy of male desire and sexuality that, she argues, constantly produces variant meanings of masculinity and, by extension, femininity in the late-Qing literary imaginary. Departing from previous scholarship on courtesan novels, she  insightfully destabilizes the theme-based and moral-induced category of “wayward novels” that Lu Xun famously coined, a category which most literary scholars have since uncritically adopted. Zamperini instead emphasizes the flux and flow of this literary genealogy, taking into account its highly intertextual and ever-transforming nature. Professor Zamperini currently works on three book manuscripts, namely Boudoir Red on late imperial pornography, Spell Bound on gambling in Ming and Qing fiction, and Clothes That Matter on sartorial practices China. Her research interests span pre-modern Chinese literature, dream cultures, gender studies, queer theory, Chinese history, fashion studies, Chinese and Tibetan Buddhism, and contemporary Chinese fiction, cinema, and popular culture.